How Not To Date Online

This’ll point you the right way.
Now, my online dating days are long gone, and if I started a new profile I doubt my wife would be very pleased. The “It’s just for research, honest!” defense never really worked before. 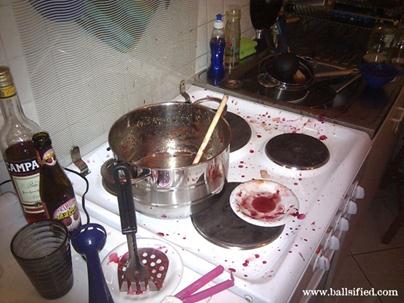 Also, she swings a lethal blender.

Luckily, my memories are vivid enough, and examples are easily procured second-hand.

A few common themes readily emerge from the material. We’ll progress from “silly but harmless” to “just tell me what watchlists you aren’t on.”

Later, we’ll talk about how to be better than that.

You want to be interesting. You want to be honest and forthcoming. You’re a good boy. You have nothing to hide.
So you throw your heart wide open… and wonder why she bolted. What happened? You were just being honest, and girls appreciate that!

They sure do, but you don’t want to crush the first contacts under the weight of your revelations. Because that’s exactly what you’re doing if you offer too much, too fast. The early bond may well develop into the kind of bridge you can drive a tank across, but until then, tread lightly.

Back then, I routinely scared girls off by revealing too much of my warped mind. It got a lot better once I realized that their kindly replying to my first post did not mean they were ready for the full in-depth everything.

Look, what’s with the pussy-footing? Drop the wink-winks and emoticrap; for God’s sake, stop posting ASCII bunnies! And leave everyone alone with your terrible, corny, so-sweet-it-cries-out-for-mustard shmaltz.

Seven pairs of jealous, ice-cold blue eyes will watch you all night. You can’t fight off sleep forever.

Also, if you want to come across as self-confident, don’t depreciate yourself by doodling like a five-year old. Remember, dating in its early stages is essentially a sales pitch. Sorry if that sounds unromantic but you haven’t come here for roses and convenient lies. You’re here for some nitty-gritty reality checks. Deal with it.

Oh, and about your poem: You’re not kidding anyone. Everyone knows it’s copy and paste. Yes, they do compare notes! If you even wrote one yourself instead of blatantly stealing it, you still didn’t write a new one for every one of the fifty or so girls you sent one to, did you?

Oh my God, you’re fucked-up enough to skip the rest and scroll right down to the “rock bottom” section. You’re not just trying too hard, you deserve a restraining order made out to the benefit of, simply, “all womankind”.

Whether you’ve “created” something yourself or nicked it: it will never, ever work because a) they can tell and b) it proves you haven’t read the girl’s profile.

Allow me to introduce the most important principle of online dating: read their fucking profiles. If you do, you’ll have something unique to say to every girl, hence have no need for templates.

Next time, shorten it to “I have a freezer with your name on it” and she’ll know it’s meant only for her.

Keep the hell away from pick-up lines or other ready-made stuff you find on idiotic sites (read: any site that uses the word “playa” or “PUA” without implying the appropriate contempt). Be advised that many girls receive the same stupid clone phrases again and again, and boy, will they be impressed by the total lack of fucks you give about them.

Write full words. Write “You are”, not “U r”. Otherwise you’ll come across as either lazy, or stupid, or both.

If you’re unsure, use a spell checker. If you’re dyslexic, leave the internet alone and go to a bar – if no sooner, you’ll be sunk in IRC.

And while we’re at it, take a moment to choose a nick that doesn’t instantly give you away
as a botched abortion:

That was the simple part. Anyone functioning halfway normally can keep those in mind.
But if any of the following apply to you, for fuck’s sake, get some help. And if none of them apply, it’ll help you see how simple it is to impress a girl the good way: by not being one of the five dozen insufferable assholes jacking off all over her inbox today.

That is, these guys – here are the Class II felonies:

Look here, can you afford to piss off the majority of girls you write to? Do you have to fend off boob invasions by being an asshole? My guess is: hell no.

It should go without saying then that you don’t want to rule out whole groups of people due to tattoos, musical preference or hair color, let alone skin color or religion.
Hint: Excluding someone based on their skin color may not strike you as racist, but trust me: it is. Don’t agree with me? Roughly 99% of people do, and that’s all you need to know.

Bonus: Start your post by saying “I’m not a racist, but…” and dispel any doubts anyone may have had about you.

Some of you may now be yelling about how you’re allowed to have distinct preferences: Yeah, you’re entitled to those as long as you don’t mistake them for common law.

If that’s you: who do you think you’re kidding? You wouldn’t really refuse a girl slightly deviating from your “standards” showing interest in you, now would you? If you’re that kind of anti-social you should be happy to settle for someone with a few ounces of extra fat, freckles, a tribal or a third goddamn earlobe. Because you’re lonely and needy and let’s face it you’d fuck anything consenting.

And some of you are flexible on that.

Except she won’t ever give you the chance because you pissed her off with the first line you tossed her. You may be a train wreck of a humanoid but congratulations, you sure are the king of tossers.

And it gets worse.

If you spent any time on the “PUA” sites I mentioned above I’m sure you’ve come across a technique called negging, a.k.a. veeery quietly needling a girl’s self-esteem until she’s low enough to spend the night with you. The “pros” will tell you just how to do it subtly enough to avoid a violent reaction.

Thank God he made sure there was no misunderstanding.

Now, if I have to explain to you why that is wrong on at least five different levels, please wait outside for the rest of the lesson. Oh, and if you get bored, there are some straight razors in that drawer for you to play with.

But it gets worse.

If you consider yourself to be one, better clear some space for your growing collection of romantic socks. If you have issues with feminism, a dating site is the last place for you to be until you’ve learned to accept the fact that women can be just as assertive as they damn well please. You want their company, you accept their rules. Supply and demand. Basta.
You say that ain’t fair? That you’re all about equality? Don’t even say that out loud because you’re only giving it a bad name. You aren’t interested in equality unless you’ve got an unfulfilled longing for getting yourself butt-slapped, groped on trains or date-raped.
Essentially you’re mimicking feminism like a boy trying on his mom’s lingerie. So stop screaming, budgie-balls, or the only pussy you’ll ever get close to will be the cat plucking your pretty feathers.
Your mom will be so mad.

Special mention should be made of guys who refer to everyone not sharing their values as “shallow” or “dumb” (bonus red flag: the word “sheeple”). Funny how they fail to notice the beam that smashed through their brains when it fell onto their eyes pointy end-first.

“im the only one whose opinion i trust”…

Last not least, if you have to point out your intelligence, it just might be too small to see.
Not unlike your dick.

Dude, someone slipping roofies is not actually a roofer.

Brace.
I’ll just let this speak for itself:

“I’m very empathetic with a high degree of compassion and often go out of my way to help others.”

No, really. That’s his self-description.

We won’t go into the deeper issues of this, because that’s a therapist’s job. My point is, if a polite rejection causes you to erupt this violently, you have a lot of stuff to sort out before you should even consider a relationship.

Another big turndown is heavy psychological baggage weighing down your profile and posts. A dating site is not the place for group therapy. (Seriously, that’s what personal blogs are for.)

He’ll feel right at home on a site more packed with potential rapists than a prison shower.

A good therapist would encourage him to hammer out the details of that plan.

If you just got out of a relationship, think twice if this is the place for you to be yet. Nobody wants to hear about your ex. If she’s still on your mind she’ll also be present in your bed (and not in the good way), and no girl wants to compete with a phantom. Get over her before getting into hers.

But it gets WORSE. One more cluster of half-wits to talk about.

This is the ultimate rock bottom of online dating, and you’d be surprised how crowded it is down here.

Q: When is it okay to ask intimate questions?

A: Whenever the degree of intimacy between you two makes it any of your damn business. She’ll let you know by going first.
I know you might just be inexperienced, socially inept and not trying to piss anyone off on purpose. Problem is, you totally are. So, don’t.

(We’ll talk about the “creepy vibe” elsewhere, it’s worth a whole extra post.)

Q: Will my honesty be appreciated?

A: If by that you mean bursting out with “I wanna bend you over my desk” it most certainly will be – they’ll be glad to know you’re not safe to go near.

And that one might be forgiven because he seems kinda helpless. Unlike this guy:

Or the one who gives Freudian slips a bad reputation:

Q: When is it okay to upload a (semi-)naked picture of myself?

A: If you’re Daniel Craig. Or on a fetish site. Otherwise, no skin from south of your neck.

This has little to do with the fact that most of those pics show pale, pathetic wimps with chicken chests and stick limbs. It’s just creepy as shit and – It’s creepy, dammit.

Q: When is it okay to post pictures of my wang?

A: When pigs floss, motherfucker.

I always thought dating sites cleared every picture before uploading it, but a lot seems to have changed in the last ten years. To anyone but the most depraved freaks, it’d be fairly obvious that uploading your dick will only get you banned from the site. Something tells me you’re not in this for the chance of scoring any more than Trenchcoat Shorty in the park expects his victims to rejoice at the sight of his goodies. So, keep the goddamn mouse in the house.

Unless you’re really classy. We’ll make concessions if it’s on a silver platter.

A: Let me split your head with this shovel.

Yes, it turns out that a clear rejection is often mistaken for “playing hard to get”. This is often combined with blowing up and calling the girl a slut. You know, because she won’t put out after the cheapest of pick-up attempts (see PUA, above). That’s just the definition of slut, right?
The kind of warpedness it takes to cause that particular logical fryup is beyond me. And I’m a bloody psychologist.

Bottom line is, if girls keep repeating into your face that no means no, chances are they mean it.

Coming soon: How to do it right!